Filter posts by the Tags of Interest section!

It's been for a while that my friends ask me how do you handle your time and how do you do all of these tasks!? To be frank, I've read and practiced a lot about this subject and it's really important to me to use my time the best possible way and being effective is my highest priority. As I do believe that every single of the most successful people has been focused all the time and used their time effectively, so we have to do the same thing they have done, if we want to be effective like them as well. There are several applications that I'm using daily, weekly and yearly.

First of all, I'm a big fan of Microsoft OneNote and it's been in my most used applications list for more than 10 years. I'm even typing the current post in OneNote: 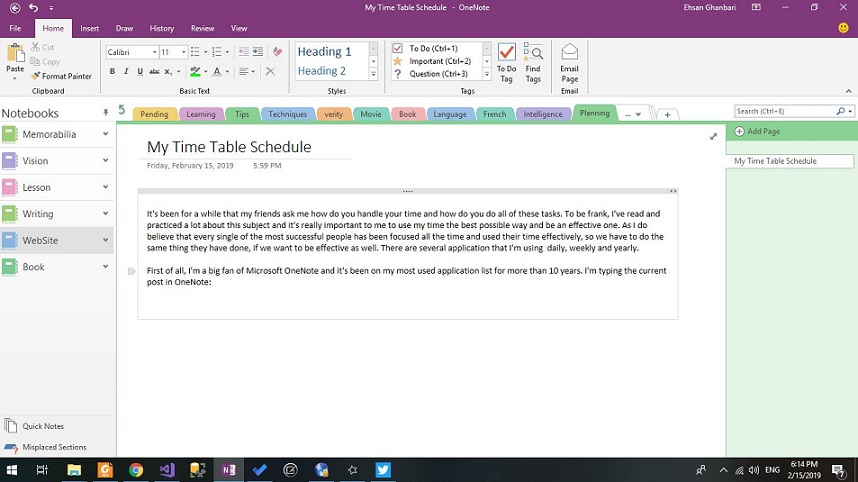 In the vision NoteBook, I've filled my ToDo list until 2030 in detail (seriously!) and I'm so hard on doing every single of them. I refer to my OneNote application every night  in a specific time and complete my list:

By the way, I'm filling and populating the above table during the month. I'm getting motivated as much as I'm getting busier! Rather than OneNote which contains the main source of my goals, ToDo list, and visions; I break the OneNote details into smaller daily tasks which are handled by Microsoft To-Do. I've installed OneNote and To-Do application in all my devices to make access easier in anywhere and anytime. 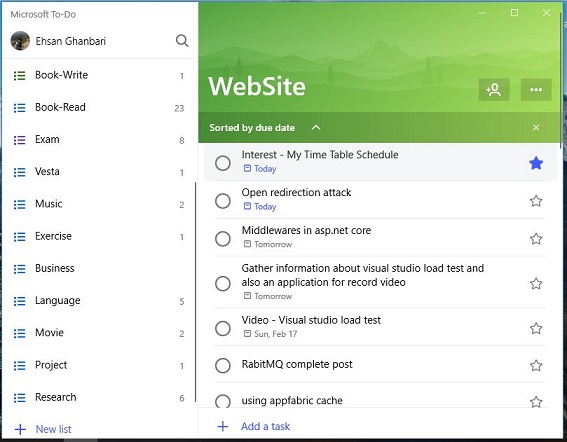 I've categorized all of my plans, as you can see in website part, "Interest- My Time Table Schedule" is the highest which is important as well(marked by start), so I'm writing it right now!!  Rather than, there are some fixed plans that I don't have to handle via the above applications, for example, I get up early in every morning at 6 and start running for half an hour. After showering an eating breakfast (15 minutes for each of them), I start my daily plans. I handle these sort of duties with Material Reminder in my android smart phone: 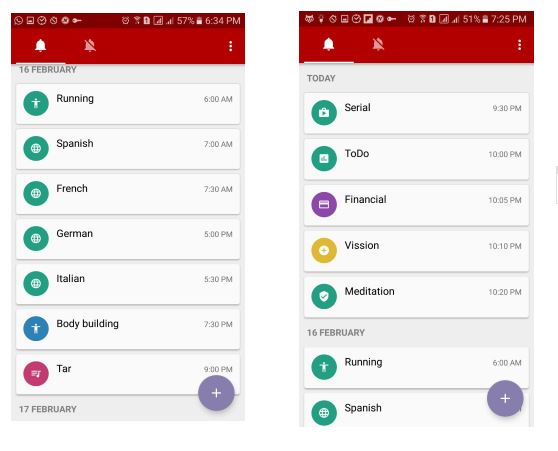 Not every task of mine in these applications are daily repeated, for example, every Tuesday and Thursday at 6, I have got a plan to swimming for an hour. I work part-time in two companies from 8 to 5 on the first three days of the week, So the other 3 three days of the week are full of tasks in this application!  There is another application which handles my meal named Meal Reminder. It's something like Material Reminder: 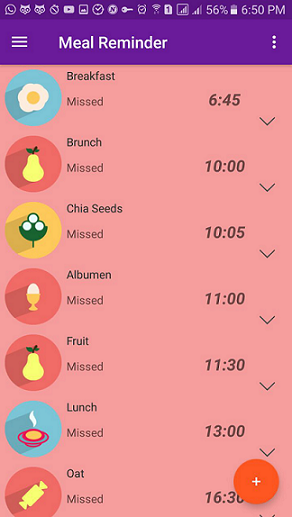 It's obvious and I don't have any comment on it. Just note that I've planned all of my tasks in all of the applications so carefully to avoid Interferences. There is another application which plays an important role in my daily schedule, Its name is Reminder which handles my hourly tasks, for example, in order be updated I read IT and technology news for 10 minutes every 5 hours or I read Spanish, French, German and Italian words for 5 minutes every 3 hours: 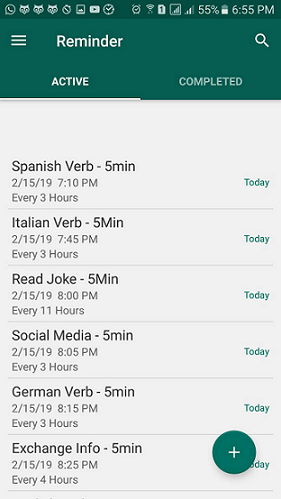 There are about 24 tiny tasks in this application. In today's world, most of the people are addicted to social networks, as you see in the above picture, I've set a time to check the social network for 5 minutes in every 3 hours. It doesn't suffice to overcome an addiction, so recently I've installed another application to block my social network application in exceeding the usage limit, AppOffTimer is the name of my application: 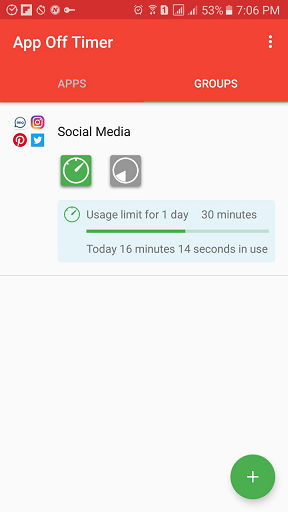 I've grouped all the social network application and allocated 30 minutes (based on that 5 minutes every 3 hours) in 24 hours for all of them. You can see above that only 14 minutes have been left for today. And the final one which leads me to be more productively is an application named aTimeLogger. Yes, rather than all of them in detailed plans I mentioned, I log all of the day of mine, even my sleeping time! 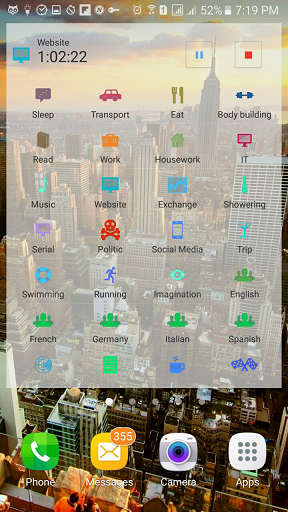 I'm interested in widgets, despite its required for such an application and I spent a lot of time to find it. As you can see, it's been for 1:02 that I'm writing this post! I don't plan for weekends and I do mountaineering, traveling, exercising, etc. on weekends.  It's really hard to handle all of these, Maybe you would like this kind of lifestyle or note, but I've chosen this one and it's really pleasant to me.